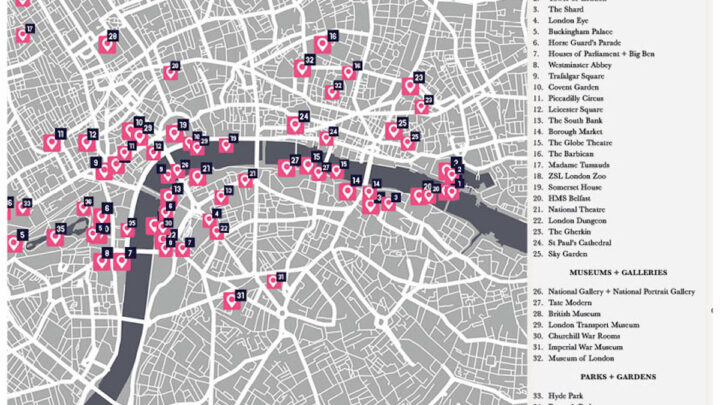 Planning to visit London? Don’t miss this London tourist map complete with 36 of London’s top attractions – in both interactive and printable forms.

You know that here at London x London we are ALL about giving you practical information that helps you really get to the nitty gritty of an awesome trip.

Well, nothing says practicality like having a good map.

When we first started travelling, there was a distinct lack of mobile interwebs, and so we learnt to become meticulous map-markers.

Much as we loved those days, it was a bit of a faff. Then came Google Maps and the whole world changed. Even so, the process of marking up the top attractions on any map, even a digital one, is a labour of love.

That’s why we’ve created this (rather brilliant if we do say so ourselves) London attractions map packed with all of London’s top sights and attractions in not one but TWO formats.

No sitting around for hours saving places to Google Maps – we’ve done all of the hard work for you – and provided a printable version of the London visitor map too (because you can never fully rely on your phone not to conk out in your hour of need). Enjoy.

Looking for the perfect map to help you navigate the city? Save this interactive tourist map of London to your phone (don’t forget to download it offline so you can use it without mobile internet) and go!

Click here to open and save the London sightseeing map.

We’ve also created this handy tourist map of central London’s tourist sites. It has the same attractions marked on it too.

Want a little more information on the places featured on the London sightseeing map? Here’s a brief rundown of each entry.

Is there anything more London than Tower Bridge? The Victorian bridge is one of the city’s most recognisable symbols.

Try to time your visit for the bridge opening and don’t forget to pop into the Tower Bridge Experience when you’re finished.

We also love this cruise that stretches from Westminster to Greenwich, taking you right under the bridge.

2. The Tower of London

The Tower of London is the 900-year-old castle sitting next to Tower Bridge. It has a long and interesting history, but today is best-known for the fact that it is home to the Crown Jewels.

The tallest building in London (actually in the UK), it’s no surprise that a trip to the top of The Shard offers some of the best views in town.

Ting at The Shard also makes it onto our list of brilliant London Bridge restaurants… it would be rude to pass up a visit while you’re there.

The London Eye is one of the city’s most iconic sights – the huge observation wheel on the South Bank. Hop on for the 25-minute ride taking in some of London’s best views.

5. Buckingham Palace + The Changing of the Guard

The official London residence of the Queen, Buckingham Palace sits at the heart of London. Visit the State Rooms during the summer months and be sure to time your visit to coincide with the Changing of the Guard.

You can book a tour of the palace with a visit to the Changing of the Guard.

The second location for seeing the Changing of the Guard, Horse Guards Parade is on the other side of St James’ Park. See the parade at 11am (10am Sundays).

7. Houses of Parliament and Big Ben

The seat of British parliament, the Houses of Parliament is located in gorgeous Gothic buildings on the banks of the Thames, with world-famous Big Ben at its side.

London’s UNESCO World Heritage church, Westminster Abbey has long been patronised by royalty, with many royal weddings (Charles & Diana, Wills & Kate) and other ceremonies held there.

We recommend taking a tour to learn about the history of this breathtaking Abbey.

Immediately recognisable, Trafalgar Square is home to the National Gallery, the famous fountains and, of course, Nelson’s Column. Don’t miss it.

Psst… you can read all about the mysterious Fourth Plinth here.

Covent Garden is one of

It’s no surprise that the famous Covent Garden is one of the busiest spots in central London.

Start with a peek at the iconic Apple Market, then make your way between the brilliant shops, restaurants, museums and pubs around the square.

While you’re in the area, head to Neal’s Yard and Seven Dials to explore more.

The capital’s answer to Times Square of course makes it to this tourist map of London.

You haven’t been to London if you haven’t taken at least one cheesy picture of the bright lights of Piccadilly Circus.

Leicester Square is bafflingly popular – there are some cool cinemas (and many red-carpet premieres are held here) but other than that, you’re best off just passing through.

The Southbank is a cool London area filled with some of the city’s leading cultural venues (The National Theatre, The Southbank Centre, BFI Southbank) along with a smattering of nice bars and street food markets.

Borough Market is London’s best-known food market. Go shopping for fresh produce or pop round to the back for a delicious variety of street food.

Or try something different with this foodie tour that includes the market.

The Globe recreates the world of Shakespearean theatre for the modern age. A visit will transport you back in time through immersive shows and a unique theatre like no other.

Go and see a show or book a theatre tour.

The Barbican is all about Brutalist architecture and some of the best cultural events in the city.

Go to gawp at the buildings and then pop to an exhibition, play, concert or film screening too – oh and don’t miss the cool Barbican conservatory, open selected dates.

The original (and we’d argue, the best) Madame Tussauds is a long-time favourite London attraction. Spot famous celebrities and historical figures at the waxworks.

Tickets can be purchased online or at the door.

Another entry on our map of London tourist attractions is London Zoo.

Sitting on the edge of Regent’s Park, the zoo is the oldest scientific zoo in the world – teaching visitors about the animal kingdom since 1828.

Somerset House is one of the few remaining Thameside palaces that used to line the edge of the river. Today it’s a melee of cultural events and exhibitions.

Check ahead to see what’s on.

Learn about British naval history onboard the HMS Belfast – entry 20 on the central London tourist map. Docked between Tower Bridge and London Bridge, it’s a surprisingly interesting jaunt in the heart of the city.

Boasting exciting new plays and groundbreaking productions – it’s no wonder The National Theatre is such a favourite with both locals and visitors.

Some of the world’s greatest acting talents have graced this very stage – most recently Nigel Lindsay and Jim Broadbent, among a whole host of household names.

London Dungeon takes you on a journey to the city’s darker side. Grim, gory and tonnes of fun, it’s a gruesome jaunt through London’s history – see entry 22 on the London visitor map.

Between the memorable name and the sleek contemporary design, the Gherkin has certainly become one of the most iconic and recognisable buildings in London.

Marvel at it from below or pop into one of the many bars and restaurants inside.

St Paul’s is a spectacular cathedral topped by the world-famous Christopher Wren-designed dome. Pick up a fast track ticket to enter.

Want to soak up some of London’s best views without the fees? Visit Sky Garden. Perched at the top of the Walkie Talkie building, entrance is free of charge.

Read our guide to making the most of your visit.

London’s two most central galleries, together, the National Gallery and the National Portrait Gallery are the places to go and see works by some of the world’s biggest and most influential artists – you’ll find both under entry 26 in the interactive tourist map of London.

The Tate Modern’s expansive collection is housed in a former power station on the Southbank – go to see some mind-blowing (and sometimes outright bizarre) pieces of Modern Art.

The British Museum is a day out in itself – explore the worlds of civilisations past and present.

The museum is well-known for its extensive Ancient Egyptian and Greek collections. Check it out at entry 28 on the free London tourist map. Book a guided tour here.

The London Transport Museum tells the story of the city’s transport system through an exciting range of interactive exhibits and displays.

Book your ticket in advance online.

Find out about Winston Churchill and the decisions he made in this underground bunker that formed the epicentre of the UK’s WWII operations.

Book a walking tour of the area and entry here.

Exploring the meaning and history of conflict from World War I to today, the Imperial War Museum tells the stories behind war in a sensitive and thoughtful manner.

It’s also one of our favourite museums in London. Not to mention that it’s free to enter.

The Museum of London walks you through the evolution of London through the ages – taking in Roman Londinium – more on that here – to the culturally diverse metropolis we find today.

Extensive Hyde Park is one of the many green lungs at the heart of the city.

In the summer months, it’s the perfect place to take a picnic and flop down to enjoy the sunshine. Whereas in Winter, a visit to Winter Wonderland is a must-do.

Gorgeous Regent’s Park in North London used to be the playground of the Prince Regent, so you can bet that it’s every bit as regal as you’d expect.

Combine with a visit to London Zoo.

Leafy Green Park may not have the striking beauty of some of its nearby counterparts, but it’s a nice place to have a stroll and a sit down after a long day of sightseeing.

And there we have it – a simple map of London landmarks. We hope that you find it useful!

Don’t forget to tag us in your pictures over on the ‘Gram at @londonxldn – we’ll be sharing the best. 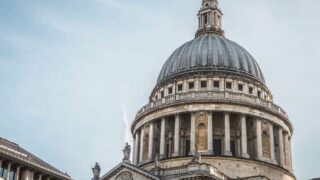 Previous
The London Pass: Is it Worth the Money? Full Review + Tips 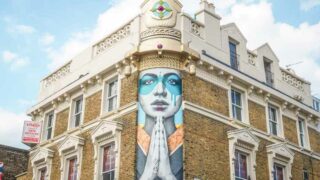 Next
The Best Things to do in Notting Hill