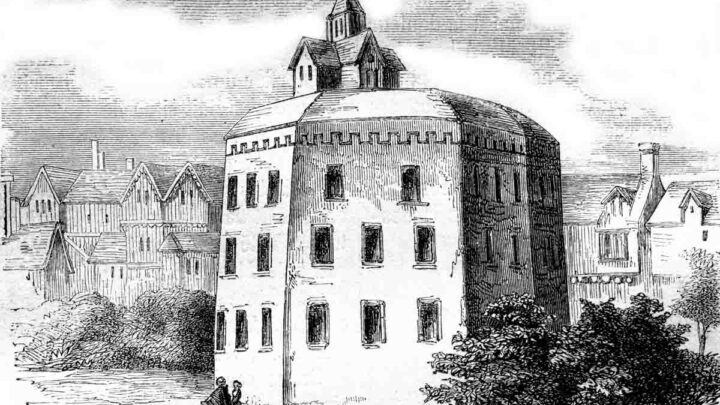 Whether you’re referring to Shakespeare’s Globe (the new theatre) or the Globe Theatre (the old) – discover these quirky Globe Theatre facts we’ll bet you never knew.

If you’ve ever wondered how on earth that Elizabethan building ended up on the South Bank in 1997, well – there’s quite a history to unpick.

William Shakespeare is without doubt, one of the world’s most famous playwrights of all time and his successful career began right here in London, Shoreditch to be precise.

A visit to today’s reconstructed Globe Theatre (called Shakespeare’s Globe to distinguish it from the old Globe Theatre) allows you to step back in time, experience the most exciting immersive theatre and imagine how Shakespeare’s words would have entertained and enchanted the residents of Renaissance London.

Allow us to enter stage left and reveal the most interesting facts about the Globe Theatre.

Interesting Facts About The Globe Theatre

The Globe was Carried from Shoreditch to the South Bank

In 1594, William Shakespeare joined a group of actors called the Lord Chamberlain’s Men. They were a ‘playing company’ under the patronage of Lord Chamberlain, during the reign of Queen Elizabeth I.

The lead actor of the troupe was Richard Burbage. His family built the company’s original theatre in Shoreditch – fittingly named, The Theatre.

The company then moved to the nearby Curtain Theatre in 1597. Their patrons however, fell out of favour with the Queen, so their landlord Giles Alleyn wanted to cancel the lease and tear the theatre down.

Undeterred, Richard Burbage and his merry men took it upon themselves to dismantle the theatre in the middle of the night and literally lugged the materials across London, ferrying them across the Thames in order to reconstruct a new theatre in Southwark.

The Theatre Was Named After Their Herculean Feat

The name ‘The Globe’ is thought to be a reference to Hercules who in classical mythology famously carried the earth on his back.

Goodness knows how those actors picked up an entire theatre and plonked it south of the river. But we’ll take their word for it.

A flag depicting Hercules was raised above the theatre along with the Latin motto ‘totus mundus agit histrionem’ which means ‘all the world is a playhouse’.

It’s also reminiscent of the famous line from Shakespeare’s As You Like It:

“All the world’s a stage,

And all the men and women merely players;

They have their exits and their entrances,

And one man in his time plays many parts.”

The Stage Roof is Held up by Two Tree Trunks

As you’ll see in the reconstructed Shakespeare’s Globe of today, the stage is characterised by two solid pillars, painted as if to look like marble. For both the original and reconstruction, these were made of two single tree trunks.

Even in the 17th-century they could be creative with set design. The ceiling (known as The Heavens) is painted like a night sky with images of The Gods looking down.

Under the floor of the stage were trap doors leading to a cellar, otherwise known as ‘Hell’. This was especially useful for spooking the audience with ghostly characters or making sound effects with drums.

The Best Seats Were The Least Stinky

Theatre in Shakespeare’s day was possibly THE most popular form of entertainment, but it wasn’t just for the upper echelons of society, it was actually affordable.

Health and safety wasn’t exactly top of the list in Elizabethan times, so they managed to squash in about 3000 people into The Globe. Today you’ll get much more leg room, as their capacity is roughly half that.

Standing tickets for ‘The Pit’ or ‘Yard’ are still the cheapest tickets today. The ‘Standlings’ were also rather rudely referred to as ‘the Stinkards’, so a seat on the third storey was preferable, due its distance from the smelly crowds in summer.

The most privileged however would actually be seated on the balcony behind the stage.

There Were No Female Actors

To be or not to be… a woman. Shakespeare in Love fans will remember Gwyneth Paltrow as Viola, dressed up as a boy in order to fulfil her dream of treading the boards.

In Shakespeare’s time, the idea of a woman acting was simply preposterous, so the likes of Juliet, Titania and Lady Macbeth all had to be played by men.

It took until 1660 (when a theatre ban was lifted) for this to change.

Margaret Hughes is thought to be the first professional actress on the English stage. She played the role of Desdemona in a production of Othello at London’s Vere Street theatre.

The Globe Theatre Went Up In Flames After a Pyrotechnical Error

During a performance of Henry VIII in the summer of 1613, a cannon filled with gunpowder was set off to mark the arrival of the king at the end of Act One.

Somehow, these ‘special effects’ didn’t go according to plan, and the thatched roof caught fire. The whole theatre was ablaze and a man’s breeches set alight in the process (bet that raised an eyebrow or three).

Thankfully, someone was there to douse him with a bottle of ale and everyone else managed to escape safely. Phew!

The second Globe Theatre was built the following year.

Success at The Globe led to Royal Approval

It was Shakespeare’s job to write the plays – and boy did he deliver.

The Globe was so successful, the Lord’s Chamberlain’s Men became The King’s Men in 1603, when King James I ascended the throne and became their patron.

The Globe was owned by six ‘sharers’. Lead actor Richard Burbage and his brother had the largest piece of the pie (25% each) whereas Shakespeare owned just 12.5%.

Burbage played the roles of Hamlet, Macbeth, Othello and King Lear and he went on to become one of the most famous actors of his time.

The King’s Men also took over the Blackfriars Theatre in 1608 to use it for their winter productions before the Puritans put a stop to theatre altogether. More on that next.

All Theatre Was Prohibited, Forcing The Globe to Close

Prohibition of all drama was enforced by the Puritan Long Parliament in 1642. It was just after the First English Civil War had begun when they ordered all London theatres to close. Yep. All of them.

Stage plays were scornfully referred to as representative of ‘lascivious Mirth and Levity’ (in other words – too obscene and too much fun) and inappropriate for the current ‘times of humiliation’.

The ban was eventually lifted in 1660 when King Charles II came into power, but sadly by that time, The Globe Theatre had long been demolished.

The Globe’s Reconstruction was Thanks to Actor Sam Wanamaker

One of the lesser known facts about Shakespeare’s Globe is that its reconstruction was all down to American actor and director Sam Wanamaker.

He moved to the UK after a successful career on Broadway, but you may also know him for his roles in classic 80s films such as Superman IV and Baby Boom.

Wanamaker set up the Shakespeare’s Globe Trust back in 1970 with the ultimate aim of rebuilding an exact replica of The Globe close to its original Bankside location. It took almost 30 years for his dream to finally be realised in 1997.

In 2014, the Globe opened their indoor theatre Sam Wanamaker Playhouse which is modelled on the style of the 17th-century Blackfriars Theatre.

The modern Globe Theatre is not located on the exact site of the original, it’s about 230 metres away. But how do we know this?

It wasn’t until fairly recently that ruins of The Globe were discovered.

In 1989, archeologists from the (now called) Museum of London Archeology found part of the theatre’s foundations, including an original pier base beneath a car park on Park Street.

Most of the foundations are below 67-70 Anchor Terrace, but because this is a listing building, there have been no further excavations.

The plaster walls are mixed with goat hair and the bricks that hold up the theatre are copies of Tudor bricks. They came up against a Tudoresque stumbling block however, when trying to replicate the thatched roof.

A law against original thatched roofs came in after The Great Fire of London. But they managed to get around that.

The Globe Theatre therefore has the first and only thatched roof in London since 1666 and it’s made from 6000 bundles of reeds from Norfolk. Clearly for Shakespeare – the planning authorities will make an exception.

Or at least as close to the original as possible – given the historical resources available.

But oodles of research went into trying to achieve a very close match.

The three-storey open air theatre was built using the same methods as the original. It’s made of the same wood – green oak sourced from English forests, fixed together using wooden pegs. So there’s no steel structure.

And No, It’s Not Round

You might be led to believe that The Globe is round. No, we are not Flat Earthers – just a little pedantic, as the building is actually a polygon of 20 sides, an ‘icosagon’, to be precise. This was only realised in the 1980s however, when the foundations of the original Globe were uncovered.

Modern health and safety measures have been factored in however, so if you do visit today, rest assured your breeches won’t be set on fire if some pyrotechnics go a bit awry.

This is Not the Only Reconstruction of The Globe

There are actually several Globe replicas and interpretations around… the globe. There are at least eight in the United States alone.

Theatres such as the Panasonic Globe Theatre in Toyko have a far more contemporary take on the building, but it is used specifically for performing Shakespearean plays.

Not that we’re biased or anything, but the London Globe is the most authentic. It’s a true reconstruction and is of course located where all the action happened, all those centuries ago.

With so many interesting facts about The Globe under your belt, you must be itching to go and see a performance there! Here are a few things to note before you visit: 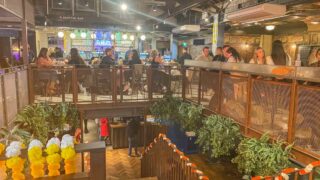 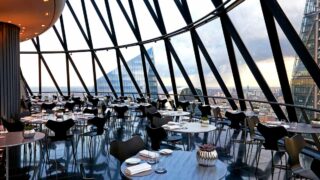 Next
Best Bars Near Liverpool Street