Unmissable Things to do in London in December 2021 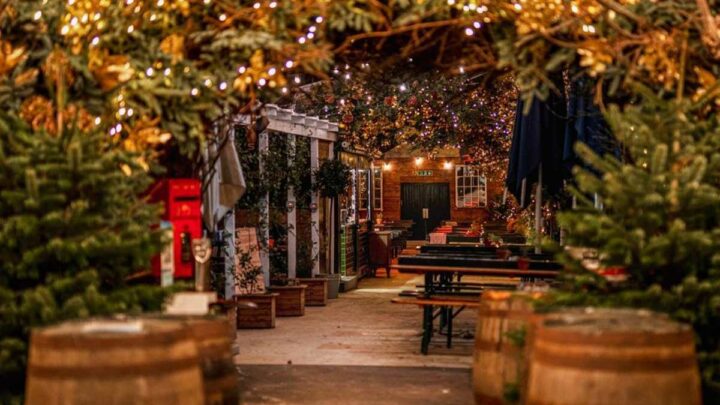 Things may feel a bit precarious these days, but so far, Christmas has not been cancelled. Will we finally enjoy some festive fun? From pantos and markets to pop ups and carols – let’s make the most of December in London.

Things to do in London in December

It’s no surprise that when the days get dark, Londoners become obsessed with bringing in the light.

If you’ve still not seen the actual Northern Lights, artist Dan Archer has helpfully brought them to London.

This immersive art installation set to music has appeared at Tower Bridge and Greenwich in previous years. From the 11th December Borealis will be swirling above Guildhall Yard in the City of London. A great one to add to your December in London ‘to do’ list.

Book ahead or walk up tickets available on the day.

Amy: Beyond the Stage is a new exhibition at the Design Museum in Kensington.

The show looks back on the life of one of the world’s most iconic singer-songwriters, Amy Winehouse.

See the outfits she wore on stage and read lyrics in her very own handwriting. From Dinah Washington to Camden, it explores the people and places that influenced her unmistakable sound.

If you’ve yet to experience the Backyard Cinema concept, it’s an immersive cinematic experience complete with characters that come to life and some pretty magical set design. See all the Christmas classics at the Wandsworth venue.

There’s also a brand new Christmas Movie Spectacular at the Troxy in East London with movie soundtracks from Love Actually, Home Alone and Elf performed by a real choir!

Watch the Nutcracker at the Royal Opera House

The return of Tchaikovsky’s The Nutcracker is always something to look forward to as December nears.

The must-see family favourite is choreographed by Peter Wright for The Royal Opera House – a glittering spectacle with all the charm of the Russian classic. A stunning and thoroughly festive treat.

Shop Indie at the Pop Up Cronx Boutique

The Cronx Boutique is a collective of three Croydon brands that create community inspired artwork and merchandise. For the festive season, they’re championing local creative talent from their pop-up on Caithness Walk.

A different Croydon creative will be highlighted each weekend, from florist Ray Ray’s Flowers to dressmaker S.V.M.

You can also pick up some irresistible locally baked treats during the week.

Get Your Ice Skates On

When December comes, there’s nothing like gliding about on an ice rink to get that fuzzy festive feeling. And even if you’re that person clinging on to the walls for dear life – you’ve got to try it once.

The most famous rinks are at Somerset House and the Natural History Museum but be sure to check out these other ice skating rinks in London that you may not have heard of.

Look up at the Christmas Lights

December is always sooo busy, but if all your Christmas shopping is done (bravo!) and you just happen to have an evening free, take time to wander around the glittering London streets while you can.

From Oxford Street to Hyde Park the city is drenched in sparkles at this time of year, and you can find all the best spots in this handy guide.

All aboard Santa’s Sleigh! It had to stop by the London Transport Museum for urgent repairs. The perfect time then to get your photo op with Santa and help him fix his sleigh in time for Christmas Eve.

Additional festive events include a Winter Roundel trail – spot the underground roundels amongst the vintage vehicles, or listen to family stories in Santa’s winter hideaway.

See the Skies Light Up Over Crystal Palace

The stunning Lightopia light festival is coming to Crystal Palace this year (previously at Chiswick House). Venture down to see the Dinosaur Park brought to life with large scale projections themed around the history of the park including the former Crystal Palace after which the area was named.

Kehinde Wiley at the National Gallery

Kehinde Wiley was the first black artist to create an official portrait of a US president when he painted Barack Obama in 2018.

His latest exhibition The Prelude at the National Gallery, looks back at the landscapes and seascapes of the Old Masters, exploring humankind’s relationship to nature in current times.

The Empowerium by The Girls’ Network is a pop up event at Coal Drops Yard that will sell items to raise money for girls aged 14-19 from disadvantaged communities.

The equality charity helps over 1000 girls each year by pairing them with a mentor – a female professional, as well as offering workshops, panel events and work experience.

Take part in a raffle for a chance to win items donated by Cos, The Body Shop, S120 and Sissy Wears as well as a one-off pair of silk pyjamas from Cara Delevigne.

It’s hard to believe that 10 years have passed since Boxpark opened their first cluster of shipping containers in Shoreditch.

They’ve since opened branches in Wembley and Croydon and have plans to launch outside of London in 2022.

To celebrate they’ll be hosting a 3-day festival #WEARE10 at all three venues. Expect to see Fight Klub, Garage Supper Club, live music from RCRD Shop and much more.

An alternative Christmas is coming to the graffiti tunnel of Leake Street Arches in Waterloo. At Miracle on Leake Street you can watch the Christmas classic Home Alone, join a skate and spray workshop with House of Vans, take part in wreath making and face-painting, all whilst munching on food and drink from Lower Marsh Market.

But don’t keep the change (you filthy animal), donations and proceeds will go to the Waterloo Action Centre, a space run by and for the local community for the past 40 years.

Think it’s cold for ice cream? Not when it’s paired with hot fresh waffles. Häagen-Dazs invites you to indulge this December at their snuggly pop up wafflerie in Covent Garden.

Join in the Shenanigans at Covent Garden

Retail therapy aside, Covent Garden will be adorned with over 115,000 lights this winter – possibly enough sparkle for Elon Musk to spot us from outer space.

From beautiful decorations to festive food and drink, there’s just so much going on at the piazza this time of year.

Get the full lowdown in our article on Christmas at Covent Garden.

December in London is all about seeking out the prettiest lights and you won’t want to miss the outdoor illumination trail at Kenwood House in Hampstead Heath.

The show is described as a sensory mix of light, fire and sound that’s suitable for all ages. You’ll also be able to pick up some warming refreshments along the way.

In London and Glasgow, the Bethlehem Cultural Festival will host a range of cultural events celebrating Palestine and the Eastern Mediterranean. At Grand Junction in Paddington you can experience the rich and historic culture of Bethlehem through live talks, music, food, theatre, film, dance and architectural heritage.

Sing Along to Carols

We cannot wait to sing out the ‘fa la la la las’ this festive season. With stunning venues such as St Paul’s Cathedral and the Royal Albert Hall, we’re spoilt for choice when it comes to carol services in London.

But if you can’t get a ticket – all is not lost. On the 8th December St Martin-in-the-Fields will stream a One Voice carol concert virtually from the Shelter website. All proceeds will go towards the homelessness charity.

An exciting all-day event at Twickenham and the perfect family day out for rugby lovers: Quins take on Northampton Saints, along with the first ever competitive women’s league match at Twickenham – Harlequins Women vs Wasps Women.

Enjoy a DJ set from Pete Tong and look out for the fire and ice themed ‘surprises’ – pyrotechnics and dancers promised.

Sample Wine by the Glass at Coravin

Coravin wine preservation specialists are opening the Wine & Bubbles Bar in Mayfair this winter, boasting the longest list of Champagne by-the-glass in the UK.

That’s 50 varieties to choose from, as well as 300 wines by the glass. And there really is the full range.

You could spend a mere £8 a glass and all the way up to a very spendy £850 a glass. Now that would be an interesting taste test.

Christmas markets have come back with a bang for 2021. Favourites include the Selfridges Christmas Market in Edward’s Mews, curated in partnership with food market pioneer, Dominic Cools-Lartigue. Make sure you go hungry because there are just too many tempting foods to try. We’ll also be checking out The N4 Makers Market for local art and craft from independent North London makers.

Have a Jolly Good Time at a Christmas Panto

Just when you think it’s all been done before, someone creates a drag show that blends Disney’s Mulan with Baz Luhrmann’s Moulin Rouge.

That’s just one of the Christmas themed shows happening this season (at The Vaults in Waterloo). From Jack and the Beanstalk to Dick Whittington, we love a good Christmas panto and there’s plenty to entertain the kids. Get the full list here.

Foodies will be pleased to hear that Santosh Shah is extending his modern Nepalese pop-up at Cinnamon Kitchen City by five weeks.

Rudies Jerk Shack are renowned for bringing authentic Jamaican cuisine to London and for the festive period, they’re putting on an irresistible Caribbean Christmas menu.

Try their Jerked Turkey with all the trimmings, cinnamon and maple glazed plantain, a tropical fruit crumble and some joyful Jamaican cocktails.

If you happen upon a spearmint coloured Routemaster bus, take a photo and you could win a meal for two at Bluebird Chelsea, two tickets to Hex at the National Theatre and much more from the English Sparkling Wine producer, Nyetimber. Upload, tag and follow Nyetimber’s Instagram for clues!

The bus will be stopping off at various London landmarks (including a 3-day stopover at the National Theatre 26th-28th November) so you can also enjoy a chilled glass of Nyetimber on board.

Life Between the Islands at Tate Britain

Life Between the Islands at Tate Britain showcases Caribbean British art from 1950 to the present day.

It features 40 artists either of Caribbean heritage, or whose art takes inspiration from Caribbean culture.

Starting with artists of the Windrush generation who came to Britain in the 1950s, the exhibit concludes with contemporary artists. Fashion by Grace Wales Bonner evokes the brass bands and parades of the Commonwealth Caribbean and a photographic installation by Liz Johnson Artur looks at south London’s Grime music scene.

Every Sunday in December

The Hawk’s Nest in Shepherd’s Bush is a heated outdoor woodland, housed in a converted railway, a great meeting spot for festive food and drinks.

For the first three Sundays in December, there’s a Christmas market from 12pm. Shop for jewellery by Kitty Joyas, the Avocado Vase by Ilex Studio and El Rayo Tequila. We’ll be adding those to our Christmas list.

Snap up a Bargain at the Sales

Retailers have had a hellish time lately and there’s a lot to make up for.

December is the month that we spend, spend, spend, so you can expect to see plenty of pre and post-Christmas offers. Boxing Day is traditionally sale day, but many start much earlier now.

And if the thought of Christmas shopping on Oxford Street makes you shudder, opt for late night shopping – it’s a lot calmer! 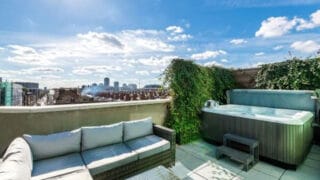 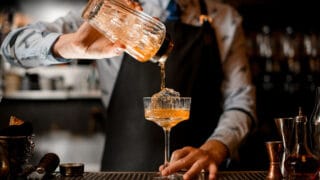 Next
Best Bars in Hackney For The Ultimate Boozy Adventures