Where to Find the Best Vegan Restaurants in London 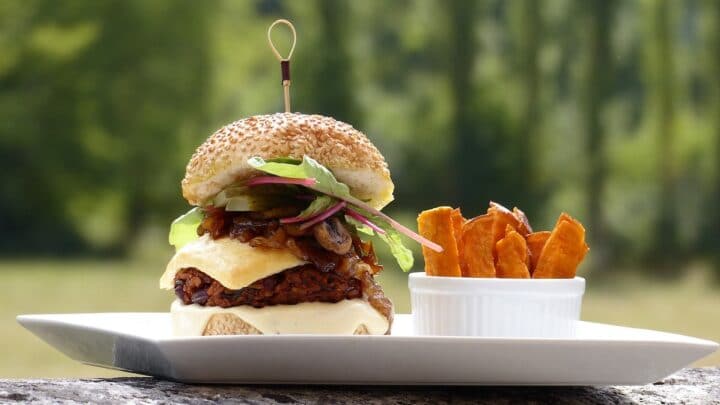 Looking for tasty vegan restaurants in London? It has to be said that the capital is one of the most vegan-friendly cities in the world.

So shun the bog-standard mushroom risotto in favour of some of the delicious fare from these spots in the capital.

But a lack of meat does not mean a lack of flavour, oh no. The dishes are seasonal and include the likes of turnip and black truffle with juicy mince, creamed morels, and a rich umami sauce, followed up with a strawberry and verbena jelly that’s covered by a cloud of disappearing floss.

This is, without a doubt, the best place out of the many fancy vegan restaurants London has to offer.

Fancy a taster from the comfort of your own home? Head Chef Alexis Gauthier has created a vegan tasting kit that’s prepared in the restaurant and delivered straight to your door.

Authentic Japanese cuisine is given a vegan twist at Itadakizen. You would be forgiven for wondering how delicious sushi or pork katsu can be half as good in vegan form, but don’t knock it ‘til you try it.

The menu takes innovation to new levels, with tofu tempura and marinated peanuts a delicious starter, and sumptuous udon bowls with Korean-inspired veggie kimbap on the side.

All served in a bamboo and Japanese silk-laden restaurant, transporting you straight to Tokyo’s Golden Gai backstreets. Pour yourself a glass of sake and thank us later.

Mildred’s dinner offering is rather delish, but we recommend heading there on the weekend for a vegan brunch instead.

The Soho spot serves up classic English breakfast options alongside the likes of cheesy beans on toast and blueberry hotcakes. Plus plenty of hot drinks (with plant-based milk, obvs) to wash it all down with.

Particular standouts are the Kimcheeze Toastie – smoked vegan cheese and kimchi slathered in gochujang mayo and then sandwiched between two slices of bread – and the Mezze Brunch, a Middle Eastern take on a fry up that includes vegan feta, apricot harissa, and garlic pitta.

Indian cuisine is famously accommodating for vegans; meat-free dishes usually feature heavily in regular Indian restaurants. But Sagar takes it one step further, with the entire restaurant dedicated to vegetarian and vegan South Indian food. And boy, it is good.

Chicken Korma is replaced with a delightful vegetable option and dishes such as Sag Aloo and Potato Palya make up the rest of the decently sized menu. The Biryani offering is packed with vegetables and even the Pilau Rice side is a pimped-up affair with veggies and ghee.

As anyone who has tried a vegan pizza will tell you: the right cheese is key.

Finding the perfect melty vegan cheese can be one heck of a task, but luckily, Purezza in Camden have mastered plant-based mozzarella.

You don’t need to stick to just a vegetable pizza though, go wild with The One With The Nduja, a spicy (fake) sausage feast that will leave you triple checking the menu just to make sure it’s definitely vegan. It most certainly is.

The One With The Potatoes is another unique offering, with roasted aubergine, oven-baked potato, and porchetta. Layering carb on carb? We are so here for it.

Miranda Café certainly proves that healthy food doesn’t always have to be bland. The health-conscious vegan joint puts a lot of thought into their dishes, which are bursting with flavour.

The restaurant looks exactly how you would picture it: exposed brick, plenty of greenery, and mis-matched chairs giving that homely but thrifted look.

Take a trip around the world with their menu, which takes heed from Thailand, the Caribbean, and Japan through a range of exciting dishes.

Their homemade katsu curry swaps meat for equally delicious seitan, and the South Carolina Hot Dog gives you a taste of the deep south without the need for any meat.

Neat Burger is the King of plant-based burgers in London. There are a few locations dotted across the capital, but the duality of choosing between sitting in the restaurant or heading for a picnic in the park makes Finsbury Park one of our favourites.

The Smash Burger is the heftiest offering, boasting a double patty, cheese, onions, and three types of sauce – or the simple cheeseburger is a more understated (but no less tasty) affair.

Make sure to order tater tots and a biscoff shake on the side for the ultimate naughty treat.

A post shared by The Spread Eagle London (@thespreadeaglelondon)

London’s first 100% vegan pub just had to make the list. Because sometimes a fancy restaurant feels too much and pub grub hits just the right spot.

When we say the pub is 100% vegan, we aren’t messing about – everything from food and drink to the fixtures and fittings are plant-based and sourced sustainably.

The dishes are seasonal and created with minimal waste, with international influence giving a nod to Hackney’s vibrant local culture. A mini squashage roll makes the perfect accompaniment to a midday pint, or opt for something more filling like a liquor-filled pie and mash or a crispy fried Korean burger.

Need an impressive location for a vegan date or a celebration? Stem & Glory is an ultra-stylish restaurant just moments away from the Museum of London.

The menu is small but each dish has been crafted to perfection, and at just £21.90 for three courses (at lunchtime only), it’s pretty reasonable for London.

Dishes include kimchi pancakes and bbq cauliflower wings to start, followed by swede gnocchi, shakshuka, or a yogi bowl filled with green goodness. Dessert-wise, your options include a baked raspberry cheesecake or a classic sticky toffee pudding.

The restaurant has recently added an entire pizza menu to their repertoire too, with everything from a simple margherita to a BBQ pineapple – controversial, we know.

Mooshies is one of the quirkiest places for vegan food in London. This burger joint claims to be the first plant-based burger spot in the capital. But are they the best? We have to say, we’re pretty sold.

Head into the graffiti-decorated restaurant for the likes of a Pulled Mooshie (a BBQ jackfruit burger) or a Fillet o Fish, where panko-fried aubergine steps into the shoes of a regular fish patty.

If you’re with a bigger group, grab some sharing nachos for the table and prepare to fight over who gets the cheesiest potato chip.

And, without a doubt, devouring Mooshies salted caramel cheesecake is the best way to finish off the meal.

For Italian-style vegan fare, head to Herne Hill’s cheeky secret, Peachy Goat. Hidden behind a window adorned with fairy lights is one of the best vegan restaurants in London.

Head there for dinner for a spicy Orecchiette Ragù or a Trofie Pesto with grilled asparagus – wash down with a glass of red for the true Italian experience.

Based in an environmentally friendly, no-waste store, Pipoca in Brixton is an ethics-conscious vegan restaurant in London that serves up totally guilt-free dishes.

For a delicious and hearty lunch, order the mezze bowl: chickpeas, potato and carrot croquettes, and roasted vegetables served with sourdough toast and pesto for dipping.

They also have plenty of vegan wines to accompany your meal, so sit and enjoy the experience in a relaxed environment.

Remember to bring your Tupperware with you to fill up with cereals, pasta, and other unpackaged goods in the shop after!

Whereas in most restaurants the meaty dishes far outweigh the vegan offerings, with Mommi, it’s the other way around. You’ll need to squint to find anything with meat in.

The Clapham restaurant itself is like Miami meets Tokyo meets Lima – and the menu is a fusion of dishes from all three spots.

The vegan offerings in this eclectic restaurant swamp the two or three meat-based dishes and we’re not complaining. Roasted cauliflower steak comes with truffled fennel puree, salt-baked beets, and an Andean herb seasoning, and soft shell tacos are served with an array of vegan picky-bits.

With the likes of a tart apple crumble, banana cake, and decadent chocolate gateau, how could you not?

Don’t overlook the mains on offer either. The oyster mushroom raclette is an oozy layer of cheese smothered over roasted taters, and the seitan stroganoff incorporates cashew nut cream to give it that smooth taste. There’s no chance of feeling like you’re missing out on food here.

With plenty of awards and a cult following, this is easily one of the most popular places for vegan food London has to offer.

Chelsea is no stranger to a fine dining spot and Wulf & Lamb is a contemporary vegan alternative to some of the other stuffy restaurants in the area.

Famed for their plant-based mac n cheese, it would be a crime not to divulge in a bowl if you visit. Worthy runner ups include the chilli ‘non’ carne and the green coconut curry served over sweet potato mash and a lineup of seasonal veggies.

The interior is light and airy, with few seats and large windows. Book a table far in advance to snag yourself a spot here.

Farmacy in Notting Hill takes the concept of farm to fork to new levels. But have no fear – the dishes are organic and biodynamically prepared, without the fussiness that often comes alongside this.

The farm itself is situated on Demeter certified biodynamic land in Kent, and an electric van transfers fresh vegetables, fruits, and herbs to the restaurant each week.

The dishes are seasonal with plenty of standouts: a hearty gazpacho, a bold mac n cheese, summer rolls and loaded mushroom tacos are instant orders.

The restaurant itself looks like a hipster paradise, with wood-panelled walls and greenery in abundance decorating the space.

For high-quality plant-based food in a stylish setting, head to The Gate. The small chain has restaurants dotted across the capital (though the Hammersmith one is our favourite).

The menu is based around classic dishes, but takes inspiration from across the globe – expect Italian risottos and Thai curries to make an appearance.

The tagine with braised fennel, pumpkin courgette, and pomegranate and pistachio nut couscous is a clear winner, though you can’t go wrong with the beetroot cheeseburger and smoky tomato relish either.

Desserts range from an indulgent tiramisu to a zingy mango and passionfruit cheesecake.  Wash down with a fruity glass of vino and you’re in for a treat. 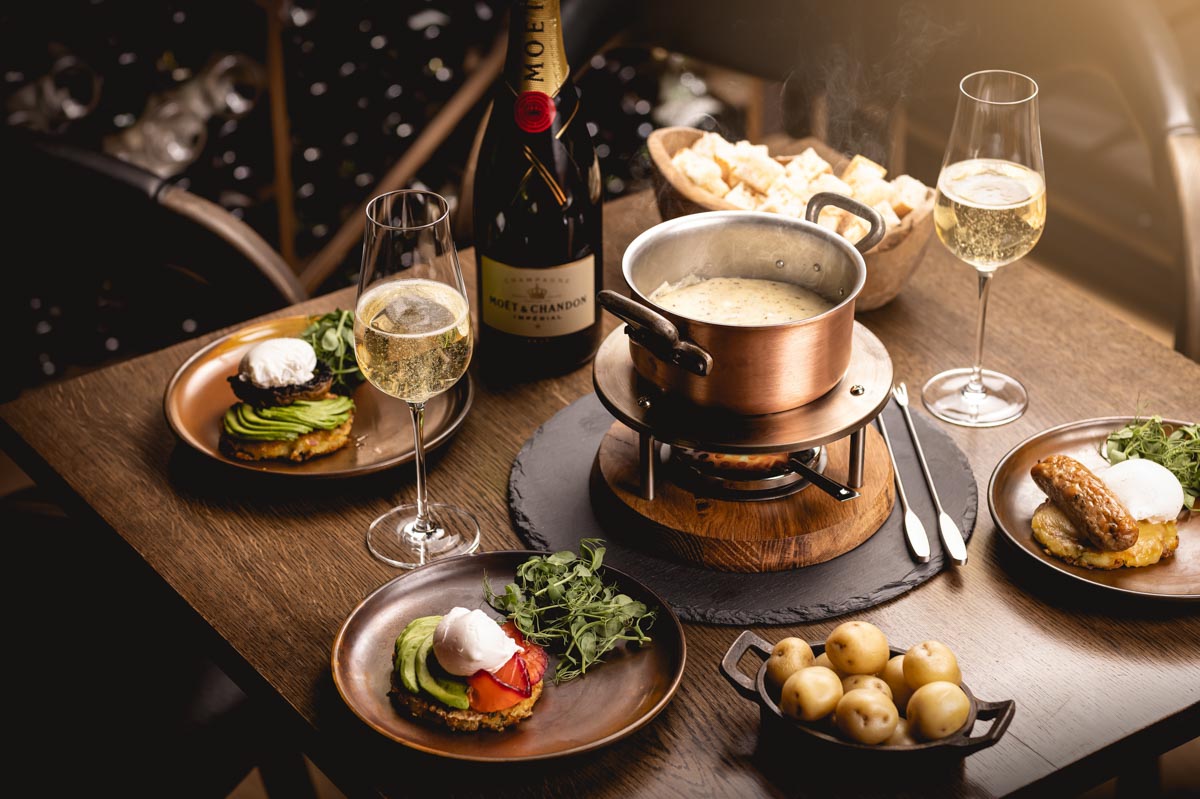 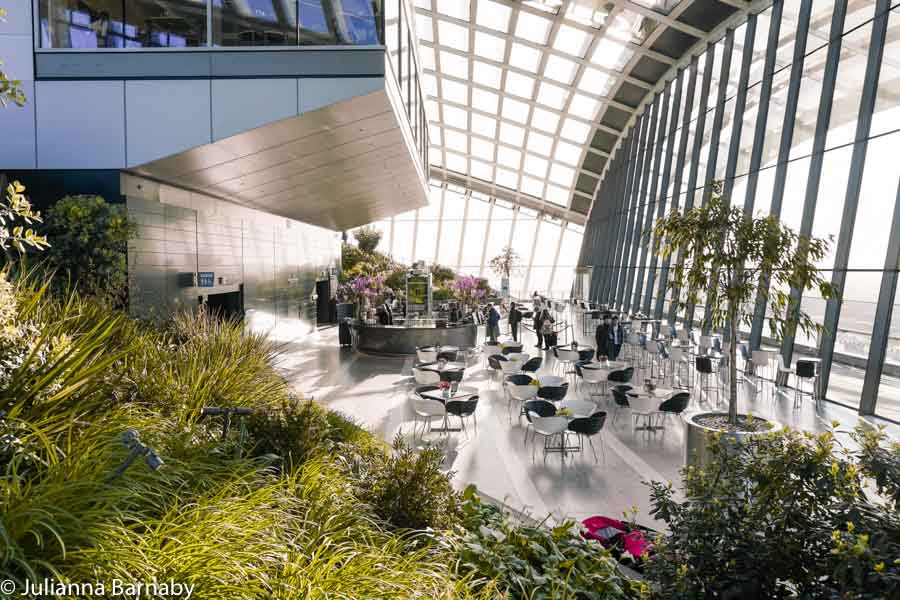 Restaurants with a View 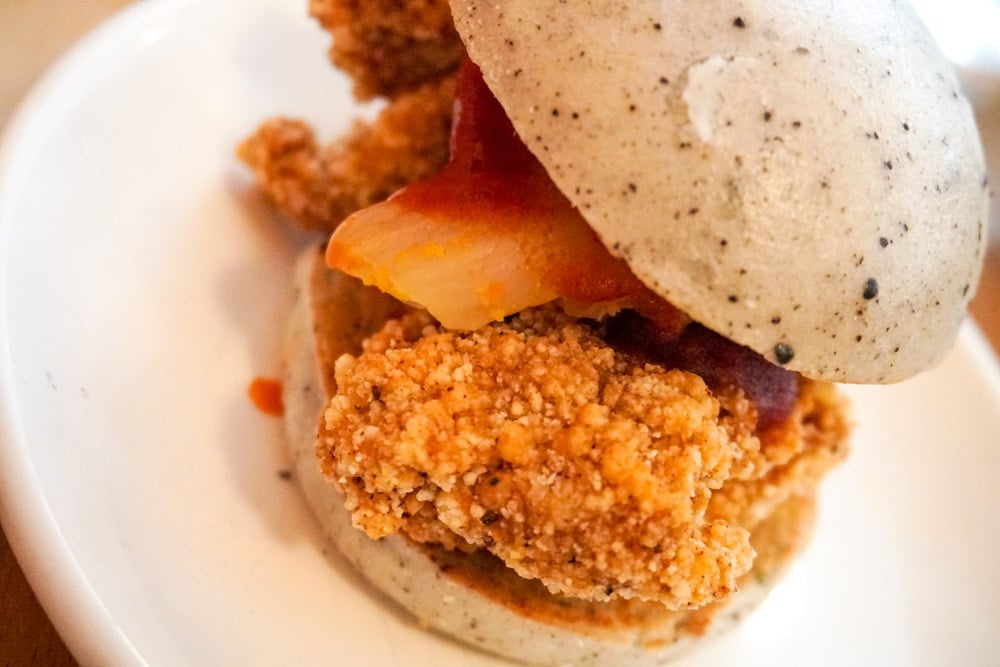 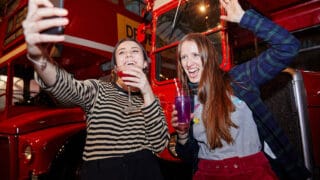 Previous
Brilliant Things to do in London in October 2021 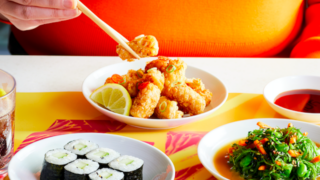 Next
London’s Japan Week Has Arrived: Here’s Why You Should Get Excited