Best Bars in Mayfair for Cocktails, Wine and Late Nights Out 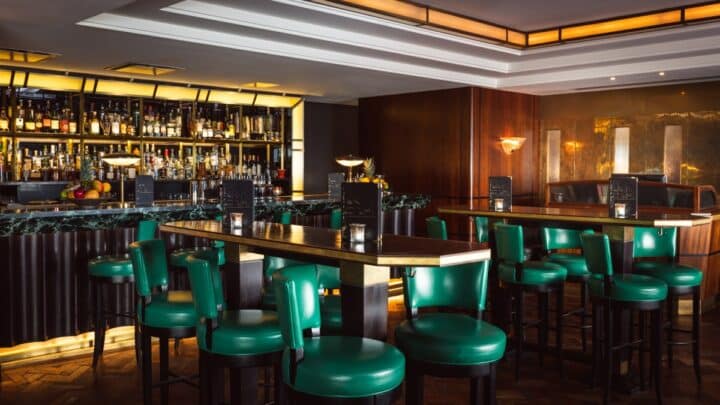 Looking for the best bars in Mayfair? Let us introduce you to the very best places to booze in this gorgeous corner of the capital.

When it comes to finding the best bars in Mayfair, you should know that there is serious competition.

Plush hotels with swanky cocktail lounges, late-night party haunts, upmarket wine bars – there’s no shortage of cool drinking spots in Mayfair, you just need to know where to find them.

These are the ones you shouldn’t miss.

The Best Bars in Mayfair

Is it OTT to call a cocktail life-changing? Maybe, but you should at least drink the martini at DUKES Bar before getting too judgy on that front.

Legend has it that Ian Fleming actually coined the famous James Bond catchphrase ‘shaken, not stirred’ in DUKES, and the rest is history (read, Londoners slowly getting smashed on the best cocktails in town).

Though DUKES is famed for its martinis, the cocktail list extends far beyond that. Head bartender Allesandro Palazzi really knows his stuff – shaking up impeccably good drinks that Mayfair can’t get enough of.

Hawksmoor might be famous for having a deliciously meaty menu, but their cocktails are equally brilliant. The Art Deco dining area overlooks Regent Street, so it’s perfect for a post-shop treat – as if you need an excuse.

Paired with cocktails is a tasty bar menu (featuring Hawksmoor classics, FYI) that’s served late until the evening. They even boast oysters if you fancy going all out. And you totally should, you deserve it.

They recently updated their drinks menu, and the new killer selection features classics with a Hawksmoor twist – the Mayahuel (a mix of Herradura Plata, Apricot, Passionfruit, Lemon, and Orgeat) is a ridiculously quaffable affair, as is Hawksmoor Froze.

When the drinks are this good, we don’t mind a humble brag.

The Coburg at The Connaught Hotel

You’re never going to struggle to find a high-end hotel in Mayfair and, with that comes a number of extravagant bars that 1) Know how to make a mean cocktail and 2) Really do it in style.

That’s pretty much what you should expect at The Connaught’s fantastic bar, The Coburg.

Exuding a country-house-feel and serving up drinks from a finely curated menu, from exquisite champagnes, classic cocktails and rich cognacs, The Coburg really knows how to execute a tipple.

Even if you’re not a guest, it’s difficult to resist the allure of a cheeky drink in a palatial art-deco styled bar isn’t it? Yes, yes it is.

Another Mayfair cocktail bar contender from one of the swish hotels in town, you’ll find the Donovan Bar nestled inside the luxury Brown’s Hotel. and pays homage to the swinging-sixties in a truly sophisticated manner.

The bar exudes a distinctly swinging sixties vibe – classy of course but lavishly adorned with prints and photographs from the era that cemented its position as one of the best bars in Mayfair.

The expansive and legendary cocktail menu at The Donovan Bar was designed by Salvatore Calabrese, who is a renowned expert in the field, and really knows how to create mouth-watering and innovative cocktails.

The Donovan Bar even has its own ‘Naughty Corner’, where you can enjoy an after-dark tipple…Need we say more?

Claridge’s Hotel is one of the most prestigious hotels in Mayfair, so it should come as no surprise that its bar, simply named Claridge’s Bar is one of the area’s go-to drinking spots.

Designed by David Collins, Claridge’s Bar is slick, suave, and sexy, and is the ideal spot to indulge in one of the many sumptuous cocktails on the menu.

When it comes to Claridge’s Bar, champagne and cocktails are the name of the game – the champagne list is one of the most extensive in the city and the cocktails are suitably classy and certainly not the type you can knock up at home.

Without being biased, we’ll be straight up honest, Mr Fogg’s Residence  is one of our favourite bars in Mayfair.

Filled to the absolute brim with random objects from a fictional Victorian explorer, Mr Fogg, it’s a riot of oddity and pushes its eclectic vibes to the max. With everything from taxidermy animals, tandems, flags, hunting rifles and more, this place is cluttered like your nana’s old house, and just as welcoming.

Possibly the most un-Mayfair-esque bar in the neighbourhood, Mahiki is one of London’s best-known late-night hotspots. Wanna spend your evening boozing it up with a celeb or two? Mahiki is a great place to start.

The name derives from the Polynesian path to the spirit underworld, ‘Lua-o-Milu’ and the theme is unashamedly tiki to the max. Trinkets everywhere, wall-hangings and props galore  – sure it’s a little tacky, but it’s also fabulous.

What do you get when you combine a restaurant that emphasises the importance of fresh ingredients and a cocktail list from a mixologist at the helm of one of the best bars in the world?

Tucked away at the back of Corrigan’s, Dickie’s slogan is “Simple, Seasonal, Sumptuous” – and that’s pretty much what you find.

The atmosphere is low-key and classy. Patrons sip on cleverly-named drinks like the Capability Brown – a delicious blend of Macallan, vermouth, Pedro Ximénez, Galliano and mole bitters that’s billed as “Deep, Spirituous and Academic” and sink into the ridiculously comfy seats.

The cocktails were masterminded by Gregory Buda – the mixologist in charge of the Dead Rabbit in New York (side note: the Dead Rabbit is often named as the best bar in the world, though I’m sure there are a lot of London bars that would disagree).

Looking for the perfect glass of vino (umm, who isn’t)? Comptoir Café & Wine is here to step up to the plate.

It’s everything you expect from Mayfair’s best-known wine bar. The expertly crafted wine list from master sommelier Xavier Rousset, is guaranteed to put you through your paces.

There’s an almost mind-boggling array of grapes, flavours, and origins for you to choose from – don’t worry though, the staff are super-knowledgeable and will help you find a tipple to suit.

Flemings Hotel is a Mayfair institution and its bar, Manetta’s, is as swish and swanky as they come.

With an interior that wouldn’t be out of place in an art-deco murder mystery, it’s a haven away from the outside world – one in which you can get quietly boozed safe in the knowledge that you’re doing so on some of the best cocktails in the city.

This is the place to come when a) nothing but the best will do and b) you’re feeling spenny AF.

Though the weird name might make it sound a bit like a seedy den of iniquity, Sexy Fish Bar is actually one of Mayfair’s swishest late night bars.

Imagine enormous, illuminated fish lanterns hanging over the bar, electrifying colours and bold cocktails, Sexy Fish is in a league of its own, and is a real stand out in the London bar scene.

This place got so much hype when it first opened, but for good reason – the combo of fabulous cocktails and late night DJs is too good to pass up.

Looking for a fabulous late-night bar in Mayfair? Head to Trader Vic’s.

Trader Vic’s is so retro it hurts – and that’s exactly why it still continues to pull in the punters more than five decades after it first unveiled its tiki lounge brashness to London’s open arms.

Let’s face it, we all love a night spent drinking amidst bamboo, ocean objects and straw mats, even if we want to pretend otherwise.

La Magritte at the Beaumont

La Magritte at the Beaumont is a Mayfair classic.

Expertly-made cocktails, timeless elegance and a real sense of class – it’s not hard to see the appeal of the La Magritte. Why rewrite the rule book when the rules are so good?

It’s not a night at the La Magritte (it used to be the American Bar, FYI) if you don’t quaff at least one martini – noone can put their finger on what makes theirs so perfect, but it’s universally accepted they’re some of the best in town.

With dazzling views over Hyde Park, it’s no wonder that 10* Sky Bar is one of our favourite places to drink in Mayfair.

Taking pride in their vintage whiskey and champagne collection, this isn’t the place to come for a quick, cheap drink – but it’s the place to come if you’re looking to indulge in some of the finest drinks in town. With knee-wobbling views guaranteed.

Retro vibes + great drinks = a winner. Smith & Whistle has got both covered.

Drinks are inspired by childhood sweeties, so expect your glass of fizz to come with a side of sherbert. The menu is pretty epic, with plenty of options to suit all tastes.

They’re dog friendly, too. And have an exclusive dogtail menu (mind you, they’re almost as expensive as the human ones!).

Step into the weird and wonderful world of Mr. Fogg’s Apothecary. Yes, we know this is another Mr. Fogg’s location in Mayfair, but believe us when we say that they are some of the best cocktail bars in London.

One of Mr. Fogg’s newest expansions, this spot boasts all the kitsch Victoriana style of the other locations in a fun underground location. Expect steampunk bartenders, blinding floral decor, and painted portraits lining the walls.

Drinks are on the pricier side (though they are ridiculously cool, so we’ll forgive), and the menu is separated into separate ailments. Do you need a pick me up? Or perhaps you’re suffering from indigestion? In that case, the Dram Stoker will fix you right up. 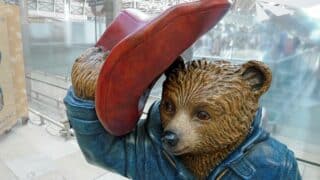 Previous
Where Did Paddington Bear Live? Sleuthing Out London’s Most Famous Little Bear 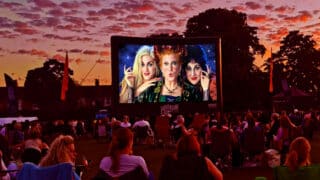 Next
17 Brilliant Things to do London in October 2022