Discover The Oldest Buildings in London 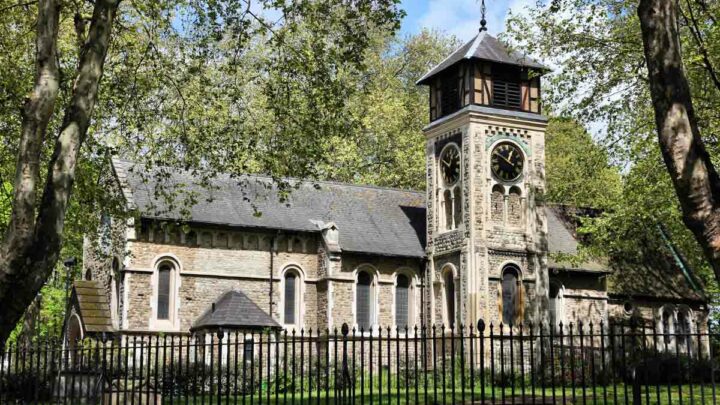 With a history that dates back to pre-Roman times, it’s no surprise that London’s oldest buildings are… well, pretty old.

From historic pubs, to ancient churches, the city’s architecture is brimming with the quirky tales of days gone by, if you know where to look. Take a jaunt around the city’s oldest buildings with this guide.

What is the Oldest Building in London?

What is the oldest building in London, England? That would be the Temple of Mithras.

The temple came into existence around 240 CE, in the second century.

It was built in dedication to a mysterious god, Mithras, by a secretive cult that we still do not know that much about. Historians think that the cult performed animal sacrifices in darkened temples (like this one) to honour their god.

While Mithras was originally a Persian god, he was co-opted by the Romans who brought the sect to England when they settled here.

The temple was rededicated to Bacchus in the 4th century, then was lost to the annals of time, until its ruins were discovered in the post-war reconstruction of London.

After its discovery in 1854, the then director of the Museum of London, W.F. Grimes excavated the site.

Grimes and his crew found several rare artefacts as well as marble statues of Roman gods such as Minerva and Mercury. His biggest discovery was writing tablets, with one also being the oldest financial document in London.

Now housed in the London Mithraeum, it’s an unusual spot that’s well worth a visit, if only for the atmospheric reconstruction of the ancient rites during your time in the temple alone.

8 of the Oldest Buildings in London

Want to explore more of the city’s oldest buildings? Here are a few highlights.

While the specific age of the St Pancras Old Church is a bit all over the place, the origins of the church date back to the 4th century.

The church is the oldest standing building in London and is one of the oldest places to worship in England. The church was formally known as St Pancras Church until its reconstruction in 1819.

Following the English Reformation, the church was one of the only churches in London that allowed the burial of Catholics.

Be sure to head into the Old Church graveyard during your visit to see two of London’s more unusual sights.

The first is the tomb designed by Sir John Soane for his late wife that is said to have inspired Sir Gilbert Scott’s iconic design of the K2 Telephone Box.

The second? The strange tree surrounded by gravestones with a rather unexpected link to the novelist Thomas Hardy.

All Hallows By The Tower

Three spots in and we already have three places of worship. All Hallows by the Tower is one of the oldest standing buildings in London dating back to 675.

Unlike some of the other churches, this date is definite and is the reason why this claims to be the oldest church in London.

The tower has a vast history, with Edwards VII using it as a royal chantry, the famous writer and religious thinker William Penn getting baptised in the church, and former US President John Quincy Adams tying the knot here.

The White Tower in the Tower of London is another of London’s historic buildings, but also another with an undefined date of construction. It’s broadly agreed that it was built sometime between 1066 to 1091.

This tourist favourite has had several functions since it was erected. It has been a residence for the royal family, used as a chapel, is home to the Crown Jewels and perhaps most famously, was used to hold prisoners.

Those prisoners include the two infamous Princes in the Tower, thought to be murdered as they were held captive in the tower and Anne Boleyn as she awaited her execution for treason at the behest of Henry VIII.

King William I ordered the building of the tower, to demonstrate Norman power. It still towers over London, keeping William the Conqueror’s legend alive.

Want to see a different side to the Tower of London? Book a spot for the Ceremony of the Keys.

Now part of the buildings of the Houses of Parliament, Westminster Hall is the oldest building in the Palace of Westminster. The hall’s origins date back to 1097.

When it was built, Westminster Hall was the largest hall in Europe –  King William II’s way of showing his power to all his subjects.

Future kings all started adding in embellishments as time went on and this beauty is now one the must-see spots in Westminster (we’d highly recommend booking onto one of the tours held by Parliament of the buildings).

Located in Farringdon, St Bartholomew is a historic church that dates back to 1123.

Does it look or sound familiar? St Bartholomew the Great has made many appearances in the arts – Shakespeare, Four Weddings and a Funeral, Avengers: Age of Ultron and Robin Hood: Prince of Thieves included.

One of the oldest buildings in London, the St Brides Church’s first wall went up during the 6th century in Fleet Street.

Some might argue that we’re slightly cheating by including this in our historic London guide since the church was burnt down during the Great Fire of London in 1666, but it was rebuilt and restored, so tom-ay-to, tom-ah-to.

The church was also used as a meeting place since it sits between the City of London and Westminster. One of its biggest claims to fame is that its courtyard was home to the first printing press in 1501.

41-42 Cloth Fair London is the location of the oldest house in London, dating back to 1597.

A historic building that’s just across the road from St Bartholomew the Great, it survived the Great Fire of London.

41-42 Cloth Fair started its life as a set of 11 homes with a courtyard in the centre. According to records, it was the building’s large priory walls that saved it from being burnt completely.

The property received the City Heritage Award in 2000, but there are eerie rumours that there are skeletons in the foundations.

Ready to embark on your own tour of the city’s historic buildings? Discover with the map below.

The Memorial to Heroic Self-Sacrifice 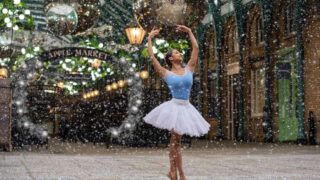 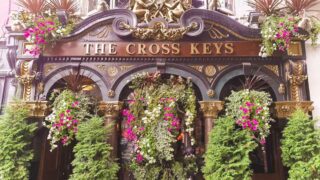 Next
The Best Covent Garden Pubs For Your Well-Deserved Pint