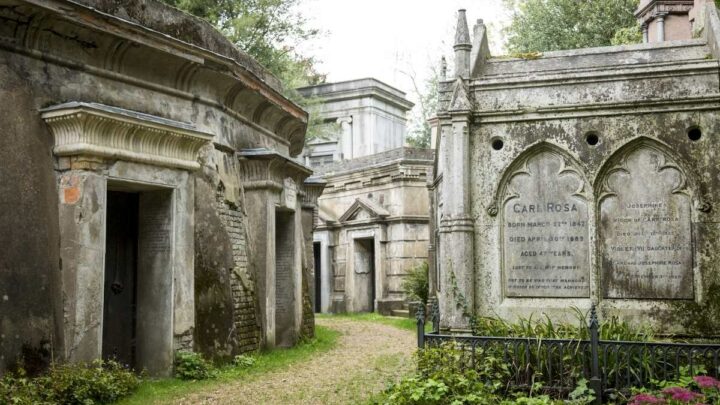 Walk the serpentine pathways and stand beneath the ash trees to pay respect to your favourite author. Or, simply visit to learn more about the cemetery during a tour.

While this is not the oldest cemetery in London, it is a spectacular setting and makes for one of London’s more unusual – and interesting – days out. Discover more with this insider’s guide.

Highgate Cemetery is the final resting place of many notable writers, musicians, philosophers and some rather well-off individuals. It has incredible architecture, mausoleums, and individual graves amongst an eerie gothic setting. In other words, why wouldn’t you visit.

While both sides of the cemetery now accommodate self-guided visitors (it used to be that you could only access the West Cemetery on a tour), the West Cemetery still has off-limit areas and is best experienced with a guide.

If you only want to visit one part of the cemetery (tickets are sold separately for both), opt for the West, which is home to Highgate Cemetery’s most impressive architectural features including the Chapel, Colonnade, Egyptian Avenue, Circle of Lebanon, Terrace Catacombs and the mausoleum of Julius Beer.

If you hope to visit a specific grave, contact the cemetery before making your booking to arrange a custom tour.

A Highgate Cemetery guided tour is well worth the additional cost. Your guide will impart insight and knowledge that reveals the history of this 19th-century cemetery.

You’ll need to purchase your ticket online ahead of time as they are not sold at the cemetery.

Entry times help to assist with the number of visitors but we recommend arriving 15 minutes early to avoid possible queues.

If your tour is in the last half of the day, we suggest visiting the East Cemetery before your tour. The catacombs at Highgate Cemetery are only open to visitors during the guided tours.

Are you or a family member deaf? On select weekends you can book a guided tour of the West Cemetery in sign language. The British sign language interpreter offers tours alongside a spoken English interpretation over 70 minutes.

The East Cemetery is more wheelchair accessible as the paths are predominantly tarmac and have gentle slopes. The West Cemetery is slightly less accessible due to steep paths and two flights of stairs but it does have a disabled-friendly toilet.

Of the Highgate Cemetery’s famous graves, that of Karl Marx has to be the most well-known. Learn more about these important figures and their gravesites below.

The eastern area of Highgate Cemetery is Karl Marx’s final resting place. Born in Trier, Germany, in 1818, Karl Marx’s studies in law and philosophy helped form his political philosophy on socialism that has shaped the modern world.

You’ll notice his grave has a gigantic bust. The sculpted head sits atop a granite tombstone that reads ‘Workers of all lands unite’.

Karl was originally buried in his wife’s grave. The monument with his bust appeared in a more prominent location in 1956. This location is in the East Cemetery and is not visited during the guided tours so make sure to visit during your self-guided walk of the grounds.

The burial of British singer-songwriter George Michael in Highgate Cemetery West resulted in large numbers of fans flocking to his grave. A private service consisting of family and close friends took place in the tiny 30-seat chapel in March 2017.

George’s last resting place is alongside his mother in the family’s private plot in the West Cemetery. A grey stone cross adorns the site and white flower blossoms surround it.

If you would like to visit George Michael’s grave you will need to make a request as it is not visited during the guided tour.

The literary work of the author George Eliot appears in many high schools. It will come as no surprise to these students that the author was in fact a woman writing under a male pseudonym.

While female authors could be published at the time, Evans wanted to escape the stereotype of women’s writing covering lighthearted or romantic topics. And so her works, which include Middlemarch, Silas Marner and Daniel Deronda were published under the male pseudonym.

Both the pseudonym and her actual name – Mary Ann Evans – appear on her tombstone.

She rests alongside her partner outside of marriage, George Henry Lewes, from whom she borrowed the pseudonym. Evans chose the surname Eliot because it sounded pleasant and was easy to pronounce. How fitting.

Despite a simple headstone in the shape of a pointed arch, Michael Faraday is among the most important people buried in the West Cemetery. His research on electromagnetism and electrochemistry formed scientific principles still in use today.

Although he received little formal education, Michael left behind an important legacy worth celebrating.

The unit used to represent the amount of charge stored in a capacitor is the ‘Farad’ in his honour.

If you are a fan of the ‘Hitchhiker’s Guide to the Galaxy’ series of six books, you may want to visit the author Douglas Adams grave. Having passed away in 2001, he was an English author, comic radio dramatist, and musician.

Adams had a love for the band Pink Floyd, sharing the title of his biography with the name of the song ‘wish you were here’.

Fans around the world continue to celebrate the author’s life on a day known as ‘Towel Day’ in a humorous reference to Douglas’s work.

Julius Beer was a German-born English businessman who made his fortune on the London Stock Exchange. He owned The Observer newspaper from 1870 until his death in 1880.

The mausoleum of Julius Beer is one of the most spectacular in the West Cemetery. The millionaire newspaper owner spent £5000 to build the cemetery’s most impressive monument at the time. The four walls feature arches with intricate glass panes.

Inside the structure is a sculpture of an angel comforting a child who represents his daughter Ada who died at age 8. Alongside his daughter, the Beer Mausoleum is the final resting place of Julius, his wife, brother, and son.

A prolific inventor and photographer, William Friese-Greene’s final resting place is in the Highgate Cemetery East alongside his wife.

William is commonly credited as the inventor of cinematography. He patented a camera capable of taking a series of photographs on a roll of perforated film.

Despite his inventions in printing bringing him wealth, William spent it all on inventing and went bankrupt three times. He was born William Green and in a remarkable move for the era, he decided to add his wife’s maiden name to his surname.

His grave features a tall marble spire with a rectangular pedestal.

‘Better a spectacular failure, than a benign success’ appears across Malcolm McLaren’s headstone. Malcolm was an English impresario, artist, musician, and clothing designer.

He is best known for his work as the promoter and manager of the bands New York Dolls and the Sex Pistols. Fans to this day celebrate Malcolm’s contribution to London’s music scene.

Having passed away in 2010, his final resting place is in the eastern side of the Highgate Cemetery. His headstone features a bronze death mask below his initials.

Ironically, the political theorist Herbert Spencer’s ashes remain almost directly opposite from Karl Marx in the East Cemetery. His theory of social Darwinism is the antithesis of Marx’s socialist theory.

Herbert Spencer believed that the principles of evolution applied to human societies and the development of the human species over time. He received credit for the expression ‘survival of the fittest’.

Shortly before his death at the age of 83 in 1902, he received a nomination for the Nobel Prize for literature. The award, however, went to another writer. A lesser known contribution is Spencer’s invention of a precursor to the modern paper clip.

Discover the Tale of the Highgate Cemetery Vampire

How haunted is Highgate Cemetery? Not surprisingly, the 19th-century cemetery is rumoured to be one of the most haunted places in London.

In the 1970s, a story emerged in the media of a vampire on the loose, causing a sensation among the believers in the supernatural.

The tale begins with the discovery of several animals found dead and drained of blood near the cemetery.

The news travelled across the nation, leading two men: Allan Farrant and Sean Manchester, competing to catch the culprit.

Allan Farrant vowed to end the vampire’s life. He set off during the evening of a full moon with the intention of setting a wooden stake through the vampire’s heart.
In an ironic twist, the police caught Farrant that evening for being on an enclosed property for an unlawful purpose.

Experts on the supernatural at the time criticised Farrant’s use of a wooden stake, claiming that it is just something out of Dracula.

Manchester’s bids were no more successful. He claimed to have found a suspect corpse in one of the vaults, but left it surrounded by garlic and incense rather than driving a stake through its heart when one of his companions persuaded him not to.

How to get to Highgate Cemetery

Due to limited on-street parking and restrictions in the surrounding streets during the week, it is advisable to walk, cycle, or use public transportation to reach the cemetery.

Bicycle: There is a rack you can use to secure your bike outside the West Cemetery gates and another further down the hill should it be full.

Underground: Exit at the Archway tube station. To reach Highgate Cemetery, either walk or take the 143, 210, or 217 bus to Waterlow Park before walking through the park to the entrance.

Road: Swain’s Lane is a one way road approached from the south. It is worth noting there is no on-site parking for visitors, however, there are a small number of disabled parking spaces available outside the entrance.

Bus: Exit at bus stop C2 or C11 before walking north along Swain’s Lane to the entrance. Alternatively, take the 143, 210, or 217 bus and exit at Waterlow Park before walking through the park to the Highgate Cemetery entrance.

The Most Haunted Places in London 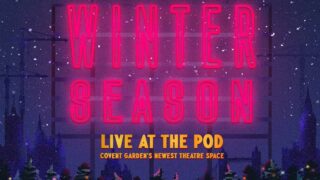 Previous
Are You Ready to Get Festive at the Iris’ New London Pop Up Winter Theatre? 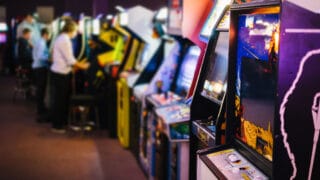 Next
Cool Arcades in London for Playing Retro Games