Posted on Last updated: 21st November 2022 Categories Things to do

The Hidden Secrets of Ely Place 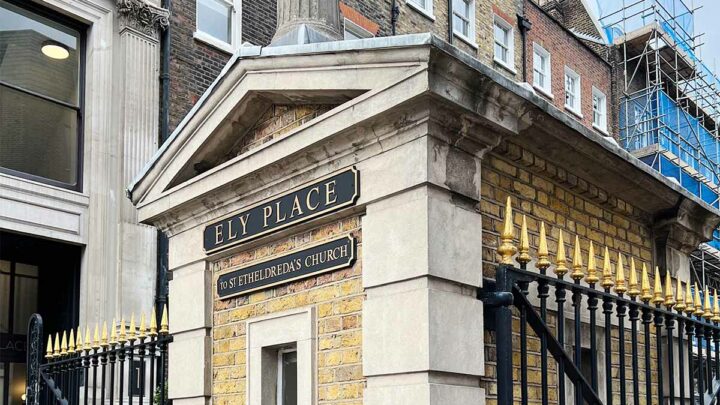 An 800 year-old history, a bizarre legal agreement that still binds a sleepy terrace, and a couple of landmarks you’re going to love. Have you ever heard of London’s Ely Place?

London is full of strange places that aren’t quite what meets the eye, but none so much as Ely Place, a quiet row of Georgian houses in Holborn with a very strange tale.

It has captured the mind of Shakespeare, and is home to an amazing pub that you’d absolutely never stumble across by accident.

Because this is a slice of London history that may in fact blow your mind, dear reader. And because by visiting Ely Place – which is in the centre of London, remember – you have in fact been to Cambridgeshire.

You should visit because you’ll have a chance to see an 800 year-old church and drink in a pub that’s construction was ordered by a bishop, and that isn’t much younger than its church neighbour.

You should visit to take a walk through this down right bizarre history that still impacts London today.

The History of Ely Place

Ely Place actually started life as Ely Palace. Back in the day a fella called John de Kirkby bought up a bunch of land in what is now Holborn. In 1290 he kicked the bucket and left it all to the see of Ely.

A little bit of background here: Ely is a town in Cambridgeshire that has an important cathedral. A see is an area of a bishop’s ecclesiastical jurisdiction.

This is important because since way way back, the bishop of Ely has been given a seat in the House of Lords – and still is today.

To fulfil their governmental obligations the bishops would need some city digs, and what better place to build some than on this heft of land they’d just inherited.

They set to work, transforming the place into a series of houses and expansive gardens. They also ordered the construction of a church (for obvious reasons), and a pub (for even more obvious reasons).

But the most important thing here is that in order to avoid the taxes and rules of London law, they saw to it that Ely Palace was governed under their own laws – those of Cambridgeshire.

By the 14th century Ely Palace had gone from a series of cottages to a magnificent inner-city mansion complete with high stone walls and a magnificent gate house to keep the stinking masses at bay.

The bishops used their palatial accommodations to charm kings and queens. In fact, good ol’ Henry the 8th was just one recipient of their generosity. Together they had a feast of 100 sheep, 168 swans, 91 pigs and 51 cows. It lasted five days.

The gardens grew to great local repute and became famed for their strawberries. It is said they were the finest in London.

So good, in fact, Shakespeare wrote them into Richard III, with one character proclaiming: “My Lord of Ely, when I was last in Holborn, I saw good strawberries in your garden there. I do beseech you, send for some of them“.

In fact Shakespeare references Ely Palace twice in his plays, the other mention is in Richard II as the location where it serves as the location for John of Gaunt to give his famous speech:

This royal throne of kings, this scepter’d isle,

This Earth of majesty, this seat of Mars,

This other Eden, demi-Paradise,

This fortress built by Nature for herself Against infection and the hand of war,

This blessed plot, this Earth, this realm, this England.

This play builds on real history and John of Gaunt is no work of fiction. He was a prince who had his house on the Thames burnt down by an angry mob, and afterwards moved into Ely Palace.

The fact he was living here leads historians to wonder if the bishops were using their power to make a bit of cash on the side from their second homes – does that ring any bells in the present age?

Another big name of ye olde times was Christopher Hatton. He had a lot of (ahem) favour with Queen Elizabeth I, who twisted the bishops’ arm to let him build a mansion of his own inside the walls of Ely Palace.

A few generations later and a younger Hatton had to tear the building down, and build it into rows of housing to pay off a few of his debts. In the present day these streets are known as Hatton Gardens, the home of London’s jewel trade.

That was in the 1650’s, and by then the palace had but a wisp of its former grandeur. The walls were crumbling, the power of the see of Ely was waning.

In 1772 Ely Palace was sold to the crown, and the bishops commissioned a new property in Mayfair.

The crumbling old palace was promptly torn down and replaced with rows of terraced houses that you can still see today.

But there are still more tangible signs of Ely’s past if you look hard enough.

With the grand palace gone, a more fitting name for the area was needed. They dropped an A and Ely Palace became Ely Place.

It retained some of its autonomy though. Today Ely place is run by a commission of people incharge of “paving, lighting, watching, cleansing and improving Ely Place”. Its gates are also guarded by beadles.

You can now come and go as you like. Just don’t get on the beadle’s bad side.

The church that was part of the old palace also remains – the only part that wasn’t torn down in 1772. It’s still named the Church of St. Etheldreda, as it was at its founding, and it’s one of two buildings from the reign of King Edward I (1272–1307) to still stand in London.

It was badly damaged in WWII but the crypt remains much the same, and can now be rented out for parties.

Our favourite remaining part of Ely Place? The pub, Ye Olde Mitre. The very same pub that the bishop of Ely had built in the 1500s.

The building has obviously changed. The one that stands now was part of the 1772 reconstruction, but a pub under that name has stood on that site since 1546 at least.

Tucked away in the back streets of Ely Place, it’d be practically impossible to stumble across. And it seems history had a hard time catching up to it as well…

Ye Old Mitre’s licences were still issued by authorities in Cambridge right up until the 1960’s.

Opening Times: You can stroll through Ely Place as a pedestrian as and when you like. 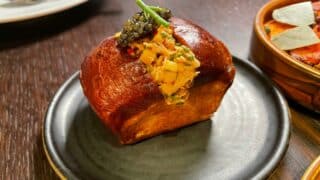 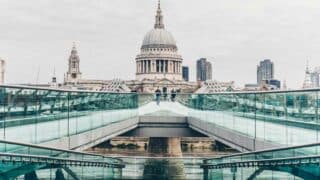