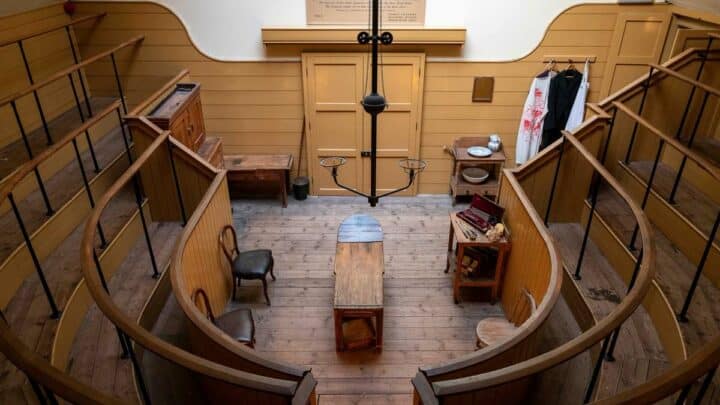 Ever wondered what an old operating theatre looked like? There’s no need to, you can actually go and visit one in London.

Across the road from Borough Market is St Thomas’ Church, which just so happens to be hiding the not-so-secret Old Operating Theatre & Herb Garret. But what’s that you ask?

It’s a museum tucked away in the church attic that gives us a look at  what medicine was like way back when – and it’s as horrid as you might think.

Here’s everything you need to know about the Old Operating Theatre & Herb Garret before you visit.

What is the Old Operating Theatre & Herb Garret?

St Thomas’ Church is the oldest surviving part of St Thomas’ Hospital Southwark site, and so that’s why up in the church’s attic there’s an Old Operating Theatre.

Still very odd to have surgery taking place in a church, right?

The Old Operating Theatre was built to be used as an operating theatre for the women’s ward in 1822.

That makes it the oldest surviving surgical theatre in Europe

So where does the Herb Garret come into all of this?

No, Herb Garret was not an eccentrically-named person. It’s actually a place used to dry and store herbs for patients’ medicines.

And Why Should I Visit?

There’s no other place like this in Europe, it’s the only surviving building of its kind.

If walls could talk we’re certain there’d be a few tales to tell here.

But seeing as they can’t this venue has a calendar packed full of events surrounding the history.

There’s even one that talks you through the surgical procedures they used to carry out here – sounds gruesome but count us in.

As well as really cool events, the Old Operating theatre is housed in a Grade-II listed building. So if you’re into architecture this will be right up your street.

During your visit, you should check out the shop. What’s a museum visit without a souvenir, right?

The Curious History of the Old Operating Theatre

But let’s start with St Thomas’ Church since the OperatingTheatre is housed in its attic.

St Thomas’ Church was dedicated to St Tomas Becket, but who was he?

He was an English nobleman who served as lord Chancellor from 1115 to 1162 and then as Archbishop of Canterbury until his murder in 1170 – never get on the wrong side of Henry II.

The church is believed to originate from a chapel of the medieval hospital that used to be there, but no one really knows for certain when that was built. Let’s just say it’s… old.

In 1697 the governors of the hospital claimed it was decaying so much that people were afraid to go inside.

This prompted a rebuild between 1698 and 1702. The stylistic choice was neo-classical, which would have been widely popular in its day.

The church is the oldest surviving part of St Thomas’ Hospital’s Southwark site.

The surrounding building on St Thomas Street: houses for the hospital treasurer, the receiver of the rents, the apothecary, and the minister of the church were all built from 1704.

The church was also renamed and this was a big deal. But why rename it?

In the Reformation, authorities were very keen on ending any association with a pro-catholic martyr (Thomas Becket), but they knew this would unsettle the local population.

So, as to not cause any riots, the church was renamed after catholic figure St Thomas the Apostle, and this seemingly went down well.

But What’s The Herb Garret Got to Do With Any of This?

It’s now the 19th Century when the church was made redundant and became the Chapter House of Southwark Cathedral.

The Garrett, which had been used to dry and store herbs for medicines for St Thomas’ Hospital was about to get a new lease of life.

By putting the women’s operating theatre inside the herb garret it gave students a separate entrance and meant that the space was now soundproofed.

The times weren’t kind to women, and neither was the medicine practised on them. We imagine the operating theatre was probably a welcome change for them.

The Operating Theatre was cleverly designed, making use of the roof’s natural access to the sun with a large skylight. Though it wasn’t heated or ventilated, so maybe not that cleverly designed.

In 1862, St Thomas’ Hospital moved from the site and eventually ended up in Lambeth.

So what happened to the Operating Theatre? It was partially dismantled and the entrances into the Garrett were blocked.

How long before the Old Operating Theatre was rediscovered you ask? Fast forward to 1956.

Raymond Russell was researching the history of St Thomas’ Hospital. He was quite an adventurous man, so he found a ladder and decided that he would climb up into Garrett.

He clearly wasn’t afraid of the dark because it was pitch black in the Garrett. The skylight had been replaced by slates and the other smaller windows were black from a century’s worth of dirt – ew.

Wandering around the attic that was thickly covered with dust could have been dangerous since some of the floor boards had been removed.

This is where the woman’s voice on the tube would come in handy, please mind the gap.

It was also discovered that part of the operating theatre, including all the standings had been removed, but no one knows how, why or when – spooky.

Chances are this happened when wiring for electric lights was installed 50 years before.

The floorboards needed to be exposed and most of the standings would have been in the way, but it’s much more fun for it to remain a mystery, so think what you will.

All in all we’re pretty glad that Raymond Russell rediscovered the Old Operating Theatre considering no other 19th Century operating theatre in Europe had survived at all.

Bring on the gruesome history talks. 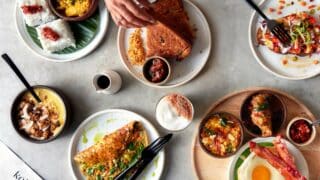 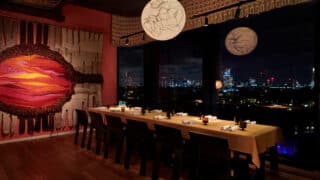