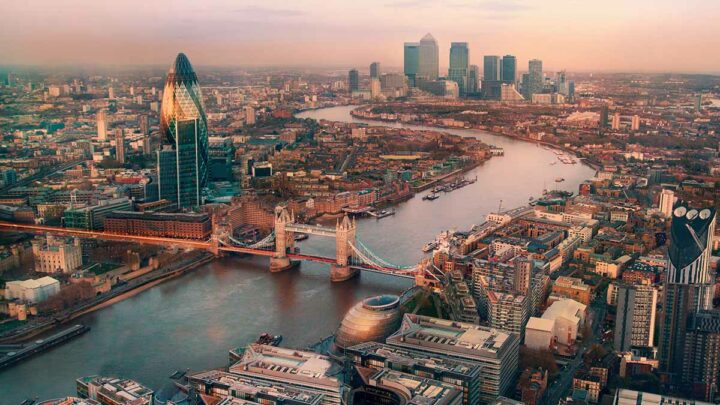 Discover these weird, wonderful and interesting facts about the River Thames.

The River Thames might be best known as the waterway that cuts a dash through the centre of London, but there’s so much more to it than that.

Beginning in Gloucestershire and ending somewhere between Kent and Essex, there’s a whole wealth of quirky, cool and interesting facts about the River Thames we’ll bet you didn’t know.

Jump aboard people, let’s dive into the weird and wonderful world of old father Thames.

Interesting Facts About the River Thames

Yes, you heard me right – rather than the little sliver we see in London, the River Thames is actually 215 miles (346km) long.

The source is at Trewsbury Mead in Gloucestershire and it ends near Southend-on-Sea.

It’s Spanned by Over 200 Bridges

Over 200 bridges span the Thames – some, like Tower Bridge and the Millennium Bridge are amidst London’s best-known sights but the vast majority are just a practical way to get across the river.

The longest is the Queen Elizabeth II Bridge which is 812 metres long.

The London section of the Thames regularly used to freeze solid and Londoners used to take advantage of the event by skating on it.

There even used to be Frost Fairs held on its surface, though that hasn’t happened since 1814.

Part of the River is Tidal

The section of the Thames beneath Teddington Lock is tidal, while the rest, from the source to Teddington, is not.

It’s Named for the Fact that it’s So Dark

The name Thames stems from the latin Tamesis, itself stemming from the old Celtic name for the river Tamesas, which is thought to have meant ‘dark’.

It’s Been Memorialised by Many Recognised Artists

Amongst them Turner, Monet, Canaletto and Whistler. It also pops up in many books and films – including Alice in Wonderland, Three Men in a Boat and The Wind in the Willows.

You Can Swim the Full Length of the River

The first person to do so was Lewis Pugh in 2006 – he did it to raise awareness of global warming but had to run rather than swim the first section as the headwater had dried up.

It was first held in 1829. Only WWI, WWII and the pandemic have seen the boat race called off. Cambridge has won more times than Oxford but it’s close (84-80).

It Goes by the Name of the River Isis in Oxford

The Oxford stretch of the Thames is commonly known as the River Isis.

This is thanks to the fact that it was wrongly thought its original name Tamesis was a combination of Thame and Isis. It wasn’t but the name stuck anyway.

Its Flow Varies Depending on Location

The Thames Used to Cause Drastic Flooding in London

In 1928 most of the East End was flooded and hundreds of people were killed across the east of England. There was another major flooding incident in 1953, which prompted the building of the Thames Barrier.

Even though the 1953 flooding prompted the decision to build some kind of flood defence along the Thames, the Thames Barrier didn’t actually open until May 1984, over three decades later.

The Barrier is 520m wide and was built to protect from dangerous and damaging surge tides.

Increasing sea levels means that the barrier is actually only predicted to protect the city until around 2060 at which point London will have to find other alternatives to keep the city safe.

It’s the Longest River in England

But not the longest river in the UK – that accolade goes to the River Severn which is 354km to the Thames’ 346km- just another quirky Thames river fact for you.

One of the more disgusting facts about the River Thames is that at one time, the river smelt so bad that they had to close Parliament.

In 1858, the pollution and sewage in the Thames was so bad that it gave off a foul stench.

The smell was so bad that parliament had to be suspended – it also gave impetus for the creation of the city’s sewage system.

50 Years Ago, The Thames Was Considered Biologically Extinct

As in, too dirty for anything to be able to live in it. That’s changed as more protective legislation has come into force and more wildlife has returned to the river.

By the Environment Agency – they control it by adjusting the height of the weirs along the river.

You Can Walk the Thames Path

This is a national trail  covering  184 miles (294km) from the river’s source in The Cotswolds to the Thames Barrier in Woolwich. It takes around 12-14 days to complete the whole trail.

Why is it So Murky?

One reason is because it carries a huge amount of sediment from its source to the North Sea.

It Forms the Epicentre of England’s Rowing Tradition

There are over 200 clubs based along the river.

There are 45 Inhabited Islands Along the Thames

FAQ About the River Thames

FAQ About the River Thames

How Long is the River Thames?

Where does the River Thames Start?

How Wide is the River Thames

It varies wildly. The widest part of the river is 18 miles across (at the mouth of the river), while it’s narrowest point in Lechlade is just 18 metres.

How Deep is the River Thames?

The depth of the river changes drastically but it is 20 metres at its deepest.

How Deep is the Thames in London?

Again, it varies – at London Bridge, the Thames is only about 1.5 metres deep.

How Old is It?

The Thames began its life in the Jurassic Period – between 170 and 140 million years ago.

Do Any Animals Live in the River Thames?

125 species of fish live in the Thames, but its wildlife extends well beyond this.

Eels migrate up the river each summer, and it’s even been known to have dolphins spotted as high up the river as London.

Plenty of birds live in the habitats surrounding the river, including the cormorant and herring gull. There are also plenty of swans, including rare black swans.

Many of the fish that live in the river are at threat thanks to the pollution leaching into the Thames, though this has lessened in recent years.

Interesting Facts About the River Thames: Read Next 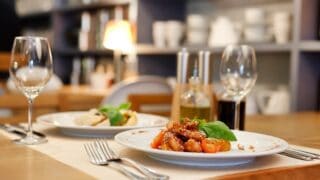 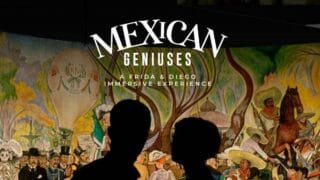 Next
Mexican Geniuses: The Immersive Experience Dedicated to Frida Kahlo & Diego Rivera in London This Month