The Hidden Secrets of Nelson’s Column

Though the square itself is renowned for its pigeons, protests, a huge (and now quite controversial) Christmas tree that Norway donates every year and a very rowdy crowd on New Year’s Eve, it’s best-known monument is… you guessed it, Nelson’s Column.

Guarded by its famous quartet of lions, there’s more to Nelson’s Column than meets the eye. Here’s the lowdown.

Nelson’s Column: What You Need to Know

What does Nelson’s Column Commemorate?

Seeing this Admiral Horatio Nelson fellow, looking down on us from such a height, might beg the question – who was that guy?

Well, he was basically considered an almost God-like war hero by the British. His leadership, strategy and tactics led to a series of naval victories throughout the 18th and early 19th-century, particularly in the Napoleonic Wars.

Nelson is buried at St. Paul’s Cathedral and you can see the actual uniform he was wearing when he died, in the National Maritime Museum.

There are several monuments commemorating Nelson around the UK but also in Canada and Barbados.

How Tall is Nelson’s Column?

From the bottom of the first step to the tip of Nelson’s hat, the height of Nelson’s Column is 51.5m tall. But for a long time, it was quoted to be 56.4m tall. It was only when they refurbished it in 2006 at a cost of £420k (funded by Zurich Financial Services), they found it to be quite a bit shorter than originally thought. 4.42m shorter to be precise. How on earth they got that so wrong, we’ll never know.

What is Nelson’s Column Made From?

The Corinthian fluted column, base and shaft was built out of granite from the Foggintor quarries on Dartmoor.

The statue of Nelson by sculptor Edward Hodges Baily is made from Craigleith sandstone (donated by the Duke of Buccleuch, from his own quarries).

The four bronze relief panels were cast from molten down French guns. The capital (the frilly bit at the top of the column) was made from bronze cast from cannons salvaged from the wreck of HMS Royal George at the Woolwich Arsenal foundry.

The upcycled materials continue, with the Trafalgar square lions – also cast in bronze taken from the French and Spanish ships, defeated in the Battle of Trafalgar.

What’s on the bronze panels at the bottom of Nelson’s Column?

You’ll see on those bronze 5.5m squares, there are four bas-relief battle scenes by different sculptors. The Battle of the Nile by William F. Woodington which faces the National Gallery, The Battle of Copenhagen by John Ternouth faces the Strand and The Death of Nelson at Trafalgar by John Edward Carew faces south towards Whitehall. Underneath are Nelson’s famous words, ‘England expects every man will do his duty.’

The last panel to be made was The Battle of Cape St. Vincent by Musgrave Watson. This one was the subject of legal action when the bronze was found to contain iron, leading to a jail sentence for the partners involved.

Who Has Climbed Nelson’s Column?

There have been some organised attempts at climbing the column by Blue Peter presenter John Noakes in 1977 and in 1989 presenter Gary Wilmot for the Six O’Clock Show.

Nelson’s column has mainly been climbed by a number of activists. Ed Drummond made the first climb in 1978 for the Anti-Apartheid Movement. In 2003, Gary Connery parachuted from the top of the column to highlight Chinese policies in Tibet.

Four attempts have been made by Greenpeace activists, the most recent incident in 2016 where a breathing mask was put on the face of Nelson to protest against the dangerous levels of air pollution.

A Brief History of Nelson’s Column

In 1838, 121 MPs and gentry decided to build a monument that honoured Admiral Horatio Nelson who had died at the Battle of Trafalgar of 1805 – the British naval victory over France and Spain during the Napoleonic Wars, which took place off the coast of Cape Trafalgar.

It was funded by public subscription, private donations (including a hefty sum from Nicholas, the Emperor of Russia) and when the project ran out of money in 1844, the government.

The Trafalgar Square site, just in front of the National Gallery (which had opened to the public in 1824) was a fitting location for the monument. The Square itself was established in the beginning of the 19th-century, it’s name commemorating the Battle of Trafalgar.

The government held a competition to design the monument, conservatively estimated to cost £20,000 – 30,000.

The Duke of Wellington was in charge of the sub-committee that chose the winner, William Railton. The original design was for a column in the Corinthian order, modelled on the one at the Temple of Mars Utor in Rome, with a statue of Nelson on the top. Steps would lead up to the pedestal of the column, where four lion sculptures would sit.

The competition had to be rerun after criticism around how it was organised. Railton slightly tweaked his design, but still won. The statue of Nelson would be built by Edward Hodges Baily.

Nelson’s Column at Trafalgar Square was constructed between 1840 and 1843 with the bronze lions added later. In the end it cost £47,000 – a staggering amount of money back then. 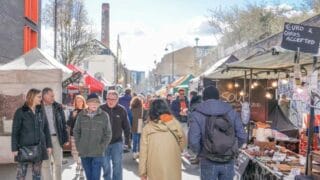 Next
Glug Glug: The Best Places for Wine Tasting in London